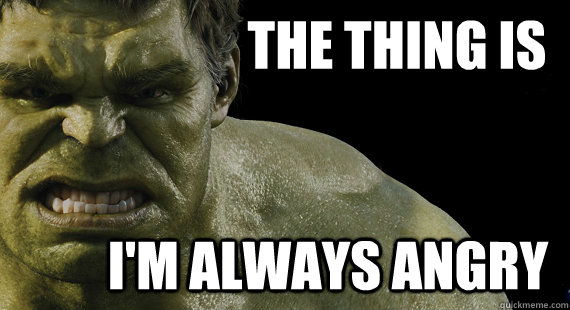 Well, not really but kinda.  And by kinda I mean most of the time.  But it’s not really anger that I am talking about.  It s more of a damn insatiable irritability.  Always there and just one little step away from full-blown anger.  Picture the times that Dr. Bruce Banner was starting to enter the morph into th Hulk but was fighting against it.  That moment…..  That’s the moment that I am constantly in.

Now let that sink in for a second.  Can you imagine spending your entire day on the verge of getting angry?  Coupled with always trying to mask just how crappy you feel so that you don’t have people worrying about you all the time.  I will say that it is a huge drain on your energy and taxes everything.  It is a constant power struggle within your head trying to suppress the irritability.  And for the record, I would say that I am about 75% successful in controlling it.  That means that at least 25% of the time, I struggle to keep things under wraps.

I am not proud of that little self calculated stat but it is my reality.  And no, it doesn’t mean I go around kicking animals, stealing candy from little kids and picking random fights with strangers 25% of my day.  In fact, I can honestly say that I have never kicked and animal nor have I stolen candy from a kid.  But I have to plea stupid on the latter but will put a caveat that it is never a good idea to cut off a guy with PTSD and proceed to give him the finger as he passes you in line at the intersection.  The fake bully facade tends to push a shit load of triggers that could potential cause said PTSD person to stop the car, open the door and express their opinion in a very graphic and profanity laced language.  (On a side note, I believe that the fake bully had to change his underwear after his behaviour was called out by a simple guy at an interscetion – nothing physical  occurred.)

I am proud of what happened?  Nope.  To tell you the truth, I was utterly ashamed of myself for allowing myself to get so swept up in the moment.  It was the expression on an elder female on the sidewalk that snapped me back to reality as the guy quickly drove away.  Dr Banner wasn’t able to keep the Hulk from showing up on that one and it scared me.  It was like I was watching it unfold from afar and I couldn’t hit pause.  But I am happy to report that this was the only time and I promise it will be the only time that things got this extreme.  It made me take stock of my situation and the handling of it.

my irritability comes out in snapping at those around me, having a low tolerance for “stupid” and just plain being a grumpy old man.  It is one of my bigger battles that I need to get a handle on and gain a greater control over.  I have sought out an example or a role model to try to work towards.  Yep, that’s right – Red Foreman is my new role model.  Think about for a second.  The guy never lost his cool but was sure to express himself and let people know where they stood with him.  What / who could be a better role model for someone struggling to maintain their cool and express themselves when things aren’t going good?  Not to mention that my hair line is eerily familiar and I applauded his choice in shirts.

In all seriousness though, my challenge is to keep my cool even when things aren’t going good.  Part of that continues to be my mindfulness exercises I do everyday, which I definitely notice a difference with.  The other challenge is to openly express myself instead of suppressing and keeping things in.  That approached apparently didn’t work for me so maybe if I start to voice, in an appropriate manner, that I am bothered by something, I’ll start gaining more control.  Because in the end, I would much rather go around calling people Dumbass then spending my time trying to keep the Hulk at bay. 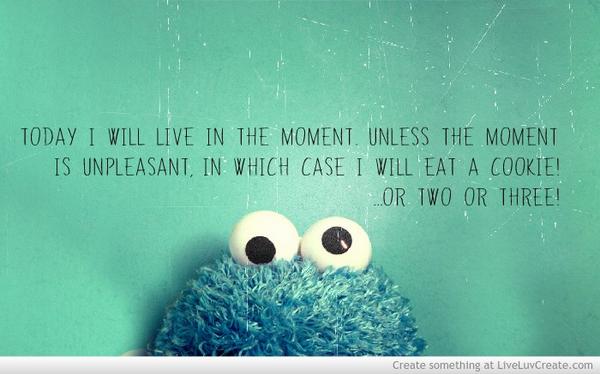 Yep, that’s the one thing that I have learned about PTSD. Even if you think things are good, they can turn hard in a blink of an eye. And when you think there is no way in hell that things can get harder you find out that unfortunately, it can and will get harder. Yesterday was one of those days.

My kryptonite is newborn babies as a baby is at the very heart of my PTSD and resultant moral injury. A baby or even an image of one can derail the most positive day in a snap of the fingers. I am reduced to tears, strickened by panic, steamrolled by emotions. It is terrifying and causes waves of guilt and shame. To Coles note it, I become a mess.

So, recognizing this evil control that babies have over me, my psychologist and I have begun to do exposure therapy to help deal with the reactions I have.  What is exposure therapy you ask and how do you do it for babies?  Well, let me tell you, its not as complicated as you might think.  Basically, for the bulk of my session, I sat there with a picture of an under 3 month old displayed on the laptop.  I could look at it for as long or as short as I would like and give as much attention to it as I felt I could handle.  Let’s just say that I was glad that the laptop would time out every once and awhile because despite having the ability to look away, it was tough knowing that the image would still be there when I looked.

I was spent by the end of the session and just wanted to bury my head in the sand and avoid everything and everyone.  I got home and napped.  I tapped out and needed to escape for a while.  And that is the norm after a heavy session.  I need to turtle and protect myself for anymore triggers while I recharge.  So, I did the self-care needed and got ready for the evening and family time.  Things seemed okay until I was relaxing and watching TV.  Mid sentence while talking with my wife about something, I happened to look up at the TV and there is a commercial playing for an upcoming episode of a show and there is a new-born baby being held by a doctor.  That right there did it.

All the self care, the rebuilding myself up to get ready for the rest of the day was gone in an instant.  My hard day that became an okay day collapsed into a heap of destructive rubble that seemed like an impossible task to overcome.  My hard day was now a fucking hard day with all its splendor and might.  That really is how fast things happen fr a person with PTSD.  I survived it, pushed it down, boxed it up and tried to forget about it so that the rest of the evening wouldn’t be ruined.  It didn’t really work but it got me to bedtime and a chance to escape into dreamland.

The funny thing about it though is that today, I woke up and the hard day is gone.  The images and the memories they bring are not front and centre.  I feel “normal” or as close to it as I think normal would feel like.  But I know to accept the moment as it happens and not to dwell on it because in the blink of an eye, the hard knocks could show up without warning.