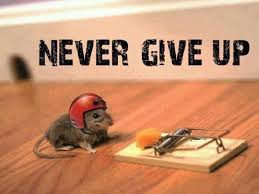 So to end the year, I figured it might be appropriate to do a bit of a personal post on a topic that is very near and dear to me.  Giving up or to put a better spin to it, Never Giving Up.

This came to a head almost a month ago and since then it has become a bit of a mantra for myself.  But it has a strange genesis that needs to be explained first.  To help motivate my son to change gears from sloth speed to that of a normal 8-year-old, I threw out a challenge to him.  I told him he had 15 minutes to finish his night-time routine and get to bed.  I even padded the time a bit and give him a few minutes grace so the deadline was 8:05.  I went to give him the five-minute warning and the look o his face said it all.  He was giving up and not having anything to do with the challenge.

I pointed out that he still had five minutes and could easily finish off the routine (only had to brush his teeth and tidy the washroom) and get into bed.  He half heartily said okay and continued to move along.  with two minutes left, he was coming to a full fledge stop and had clearly thrown in the towel, Mickey style from Rocky 3.  That’s when the competitive dad came out mixed with PTSD dad and caring/nurturing dad.  I pushed him to keep going, to continue moving forward, to forget giving up because that is something that you can not afford to do in life.

He finished and got into bed with some time to spare.  We then talked about giving up and how this is never an option.  You can never give up.  Period.  End of story.  I explained that there will be lots of times that he wants to give up but he has to keep going til he finished the task before him.  We talked about “stopping” to get yourself together to continue to fight on but you always go back to the task at hand to finish it.  I  pointed out that in life, there are going to be numerous times when quitting feels like the best thing to do and it is at those times that he will need to dig down deeper to keep going.

Over the next few weeks, I would show him videos and point out the “never give up” mentality that we were talking about.  The first example that I thought of was the |Wendy Ingraham”s 1997 Ironman finish where she crawled the last portion to finish.  (Here’s the link – https://youtu.be/MTn1v5TGK_w )  This then progressed to watching a video of Stephen Hawking giving a lecture while sitting in his wheelchair.  All the time the message of never giving up echoed from me as we talked about the videos and of others that chose to fight on.  I would mention that they all had a choice to make and decided to keep on keeping on despite the challenges that they faces. Heck, I even used my finish at Ironman Canada as an example of not giving up.  I think he got the message.

But, more importantly, I think I got the message too.  I will not sit here and try to hide the harsh reality of PTSD and paint a happy Bob Ross picture of a country side for you.  Being brutally honest about PTSD, Christmas and more specifically, the lead up to the big day was rough.  I was an emotional wreak and struggled to go out and do the things that needed to get done.  My workout schedule and diet went completely to shit, I drank too much / often, fought to get myself out in public and worked extremely hard at covering up the pain and upset that was oh so present.

It was a struggle and pushed me into some very dark spots that I did not want to be nor do I ever want to return too.  It was shitty and I told my psychologist that in those lowly, dark spaces, I could understand why people made a choice to kill themselves. (By the way, I should mention that there is no fear of any suicidal ideation on my part, read on and you will understand.)  It is relentless and bombastic in those spaces and if you are not prepared for them or aware of the options out there, it can get ugly, and fast.  I explained that even though things were bad, suicide was never an option that I entertained.  Instead, the option that came to mind was “Never Give Up”.

My psychologist understood what I was getting at and pointed out that the empathy I was talking about is something that would serve me well on this PTSD journey.  I think in many ways knowing the darkness and the pain associated with it is hard to comprehend, even now after the fact.  It is aggressive and relentless and if you don’t recognize it, it can take over your thoughts and actions faster than you can imagine.   But to me, even at the lowest and darkest, the only option for me was to Never Give Up.  Nothing more, nothing less.

I have been affected with PTSD as a result of my career but it is not the end of my career.  To be more accurate, PTSD is now part of my career.  When I retire, many years down the road from now, I will look back and see it just like any other memory I have of policing.  Yes, it will shape my career from this point forward just as it will my life with my family and friends but regardless of where my journey goes, I know that I will Never Give Up!  I’ve got too much to do and people than depend on me getting it done.