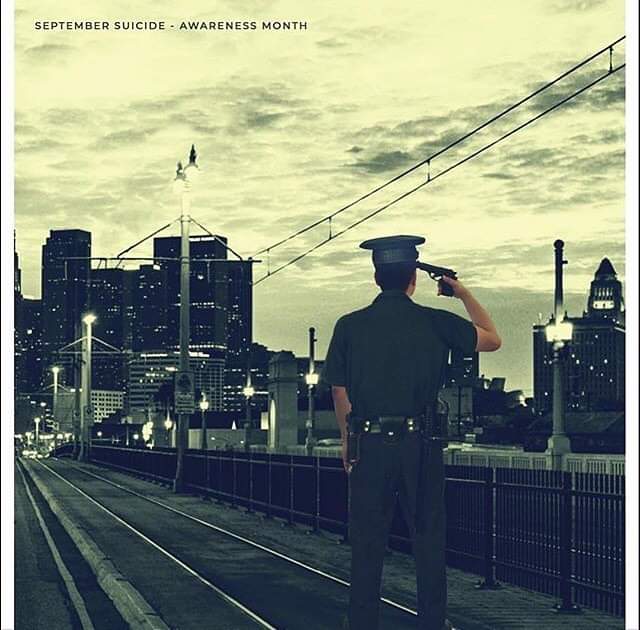 Well, I was actually going to be writing about the power of music but the events of this past week made me change it up.  And, before I go any further, this might be a trigger filled post for some.  Heck the pic is enough to cause a reaction or two on its own.

Another member of a law enforcement agency in Canada took his own life this past week.  He died from suicide.  He killed himself.  The reasons for him believing this was the only means for him to help himself end the pain he was enduring will probably never be known, as is usually the case.  Suicide leaves a lot of unanswered questions in its wake and there is absolutely nothing that can be done to change it.  I am sorry that he didn’t see any other route.  It saddens me that he saw this as his own viable option to help himself.  I’m hurting that yet another Brother within the policing family and more so of the human family decided to take his own life to end his suffering and pain.  But, I want to make this absolutely clear, I’m not mad at him for doing this.

What I am mad at……  No correction, what I am FUCKING PISSED about to the depth of my core is what is going on behind the scene.  The inaction by agencies, including military commands, to step up and deal with the issues that are causing the respective members to seek out suicide as a means of stopping their pain.  Pain, which in many instances is exacerbated by the ongoing sanctuary trauma that is inflicted day in and day out.  But as has been the case for the past while, the “leaders” step up to the pulpit and decree that we “are awaiting the results of a study” or “we are researching ways to help” or “we are looking at how we can support our members”………………  Well, here’s a news flash, the answers are already right in fucking front of these “leaders” but no one is willing to step up and do what needs to be done or said.

So, without receiving any of the millions in government funding to look for the answers, I will give the solution that every first responder agency and military is avoiding like the plague.  Ready for it?

The leaders of these groups, or even the government, need to come out and clearly state that “We have a mental health crisis on our hands brought on by the service these women and men take upon themselves to help others.  We are failing in this battle.”  End of statement, full stop.  That fucking simply.  I know you are now wanting to call bullshit that it isn’t that simple but please indulge me a bit further and you will see how such a small and simply statement would make a difference.  When I’m done, if you still want to call bullshit, feel free but keep reading first.

The simply act of admitting that there is a crisis opens up the issue for everyone to see.  It takes away the power from those that are trying to cover up the reality of the crisis and forces them to acknowledge, against their professional or personal desires, that there is a problem.  It also opens the conversation up in a big way with the rank and file, knowing that the bosses have come out and said we have a problem.  There is no more hiding behind the vail or waiting for a study or review to be completed before comment.  The band-aid has been ripped off and oozing scab is there for everyone to see.  Don’t hid the fact that some members make a choice to end their lives by suicide.  Do you get the idea?

Once the leader of any organization says that there is a crisis in regards to mental health, it can no longer be denied in the open forum (although I fully believe some would still cry foul that there isn’t a crisis).  Meaningful steps can be put into place to help deal with the crisis in a fulsome way and not the lipstick on a pig approach we now have.  If the message comes from the top down, the change starts happening from the top down (I am a firm believer that change at the working level has already begun to take hold).  And with the change, there can start to be healing and hope brought into the picture.  At some point, you achieve 360 degree communication on the mental health crisis and it becomes normalized in everyday conversation.  And, that is when the true battle can be fought and won.  The leaders need to admit that their respective organization / agency is broken so that they can start to fix it.

But, sadly, this will never happen, regardless of how simple it would be to start.  The reason is unfortunately equally as simply but uglier than having to deal with another member who took their life by suicide.  The reason is LIABILITY.  The almighty dollars and cents.  The only reason why no “leader” has stepped up and publicly said there is a crisis and we are failing in dealing with it.  That would imply that they recognize that the traumas endured through doing the job and the trauma inflicted via coworkers and supervisors is causing unheard of numbers of members to be diagnosed with PTSD  and a few to take their own lives by suicide.  It would be a financial suicide for the agency / organization or I should say that they think and believe it to be…….

Well, fuck LIABILITY, stand up, do what’s right and make suicide an “ON DUTY INJURY”! Recognize it as such, pay out the benefits entitled to an on-duty death, full regimental/agency honours,  and take ownership that the agency failed one of its own.  Imagine what would happen if an agency leader did that.

I would work for any leader that had the guts to stand up and say that they failed the member that took their own life by suicide.  Or that they took their own life because we didn’t do enough to normalize the conversation about mental health, didn’t make the process of getting help easier and allowed bullies to remain in positions of leadership.  That would be a true leader looking out for their charges.  Sadly, the fear of admitting liability is keeping the appointed leaders from stepping up and doing this.

So there you go.  One simply statement that could change the mental health crisis battle if it came from the leaders of the agencies, organizations or even governments that hold power.  The rank and file have been screaming this for years yet no one higher up is willing to join the screams.  And unfortunately, until they do, suicide will still be an answer that some see as away out of the pain and countless others will continue to suffer from the damages their service has caused.

RIP Brother.  May your death by suicide help bring the change needed to end suicide as an option.

As a post script, go back and re-read the post.  Count how many times I used the word suicide.  It needs to be said openly, all the time, without hesitation.  It is not a dirty word or an offensive word.  If you want the suicide of first responder, military and any human being to stop, you need to use the fucking word.  Suicide – it is only deadly when we don’t talk about it.

One thought on “Why is this happening?”