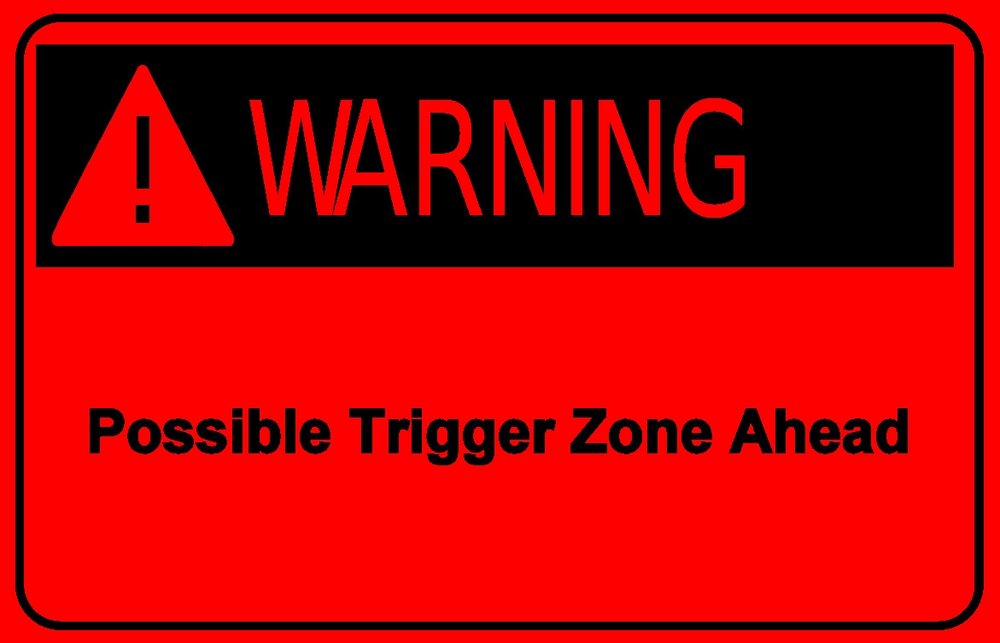 I am going to say something that might upset people.  Heck, it might even piss off a few people and cause people to think that I am full of shit and don’t know what I am talking about.  But as always, hear me out til the end.  If you don’t believe I made the point, tell me.  Lets work through this and come to a common ground.  But first and foremost, read on.

When dealing with PTSD we always talk about triggers.  Actions, words, sights, smells, foods, situations or what have you that cause a reaction within us.  We tell ourselves and others that it’s a trigger.  For me, babies under the age of 3 months were huge for me.  Watching a Huggies or Pampers commercial on TV would set off a panic attack of epic proportions.  I would be frozen in fear.  It was ugly and these moments controlled my life and forced me to change-up how I would do things to ensure that I would limit my potential exposure to babies.  It was bad and it was a textbook “trigger” according to the professionals and every piece of research and commentary out there.  But here is the reality……..

Triggers aren’t real.  Literally and figuratively.  They are not real.

I know you are thinking that I just said that I was triggered by babies.  Go back and read that paragraph again.  Did I say that babies were MY trigger?  I did say that it is considered a textbook trigger according to the conventional PTSD theories but I no longer see it as a trigger to me.  So, you are probably a bit amped up right now at this statement and are wondering what the hell are they smart guy if it isn’t a trigger?  Well, simply put it is a MEMORY.

I know you’re thinking that this is wacked.  A memory that causes you to react is a trigger as per the definitions out there so I’m describing a trigger.  Nope………  a trigger is something that you don’t have control over.  Something else is telling you that you are supposed to react to what is being presented and that removes any and all control you have over the situation and how you will deal with the memory.  By buying into the “trigger” concept, we limit ourselves and prevent ourselves from moving forward because we are stuck in fear, terror, anxiety, panic or whatever other emotion cascades over us.

Throughout our day, we are usually bombarded with lots of memories from our past, both bad and good.  But, we aren’t set off by all of these memories.  Why is that?  It comes down to us not giving up control of those emotional memories and living through and with them.  Even when I think of times that I might have gotten hurt as a kid, as bad as the memory of the pain and fear might be, it ends with the memory of my mom taking care of me, nurturing the pain away and cleaning up the wound.  Sure, I could sit there and focus on the injury, the pain and the fear but the focus becomes the mother’s love given at a time of need.  So, in essence, I controlled the narrative of the memory and shaped it to my liking.

Now consider that same scenario as it could apply to a PTSD memory or by definition a trigger.  What if instead of allowing the memory to dictate the narrative, you decided to focus on a positive from the memory and keep that focus while you rode out the memory?  If you can’t see one right off the bat, the easiest one is “You made it through it once, you lived”.  That’s the biggest positive so focus on that to start as you move forward.  You will see more and more moments that are actually positives that you experienced.  You will also begin to take control over the memories and dictate how they impact on you.

Believe me, I know this sounds simplistic and far-fetched but it does work.  And it is hard work but we all have a choice to make and sometimes, it’s the uncomfortable choices that we need to make to move forward.  Remember I said babies were bad jub-jub for me?  Well, I practice what I preach and with a combination of prolonged exposure, talking and some hard work, I took that memory and made it mine.  I accepted all the bad that happened, got mad and then took control over the memory by saying it was “sad” that it happened.  It is still a memory that comes up every once and awhile but I control the narrative and what part I want to focus on instead of allowing it to control me.

To explain what I mean is actually pretty easy.  I can now watch any Huggies commercial and see the beauty of a newborn child.  Hell, I even watched an episode of Greys Anatomy where a 21 week old premie was born and died (This is identical to my moral injury with the exception of what happened after the birth) but I watched the whole damn thing, without going off the deep end.  Afterwards I simply thought to myself, that this is such a sad situation and I know exactly how they feel.  Full stop.  Nothing more, nothing less.

There are so many aspects of PTSD and it’s associated behaviours that we can’t control.  Yet one area that we can begin to take back that control is one of the scariest.  And, I am not saying to go all radical and put yourself in front of a screen and play a loop of your triggers.  That is a set up for failure and not recommended in any way shape or manner.  Instead, when you are triggerd by a memory, take the first step and stop calling it a trigger.  Call it what it is –  a memory.  Next put the adjective to it –  a sad memory, a scary memory.  Then you will start to do the hard work to recognize that even in the worst moments of our trauma, there are positives that happened that we need to find and learn from them.